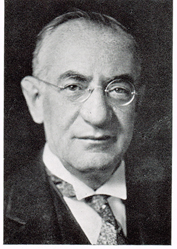 Isaac Landman was born in Russia on October 4, 1880. He emmigrated to the United States in 1890.  He graduated from the Reform Hebrew Union College.

In 1911, with Jacob Schiff, Julius Rosenwald, and Simon Bamberger, he founded a Jewish farm colony in Utah. During World War I he was “said to be the first Jewish chaplain in the United States Army to serve on foreign soil”

In June 1906, he was elected as Assistant Rabbi at Keneseth Israel.  Rabbi Landman and Rabbi Krauskopf developed a syllabus so that the Bible might be used as a textbook in the KI Religious School.  This was a new concept.

In 1914 Rabbi Landman resigned from KI.

During World War I, he served as a Jewish Chaplain in the Army.

Rabbi Landman served as a delegate of the Union of American Hebrew Congregations to the 1919 Paris Peace Conference.  He was an opponent of Zionism. In 1922, Rabbi Landman and Rabbi Philipson represented the Reform movement’s position, which was anti-Zionist, to the U.S. Congress’s House Committee on Foreign Affairs. President Harding and the Congress supported the Lodge-Fish resolution.

Rabbi Landman was a leader in Jewish–Christian ecumenism. During his career, he was an editor of the American Hebrew Magazine.

In 1931, he became rabbi of Brooklyn’s Congregation Beth Elohim. In 1934, he began editing the Universal Jewish Encyclopedia, which was published in ten volumes in the 1940s. Landman was also a playwright. With his brother, physician Michael Lewis Landman. They authored the play A Man of Honor.