When Art Went to War – Posters of WWI

When Art Went to War – Posters of WW I

Selections from the Richter Family Collection

As part of the commemorations of the 100th anniversary of the United States entry into WW I Reform Congregation Keneseth Israel and the Temple Judea Museum mark this historic event with a series of lectures and a major exhibition.

EXHIBITION BACKGROUND: During World War I the United States produced more propaganda posters than any other combatant, and in a much shorter time. With visual culture the domain of private enterprise, the government commissioned advertising agencies and artists to produce the posters that supported the war effort.

The history and culture of advertising were all new during this time but the still nascent industry responded to the opportunity to such an extent that the country was flooded with posters. It was not unusual for a single school classroom to be plastered with as many as thirty-five posters. In all, twenty million copies of 2,500 posters in support of the war were sold, thus signaling the beginning of our image saturated world. The Division of Pictorial Publicity, which also produced posters for the war effort, was the first US government art agency in support of a war.

KI’s Spring Forum 2017 (one of the three lectures)

(Free and open to the community)

(Free and open to the community)

GONE TO SOLDIERS EVERYONE

Joan will explore the development of several monumental art movements during WW I, among the deadliest conflicts in human history, and will show how art became the perfect vehicle for expressions of despair and the catastrophic psychological and physical toll that this war took on humanity.

FOR MORE INFORMATION ABOUT THE EXHIBITION AND THE PROGRAMS: 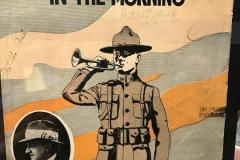 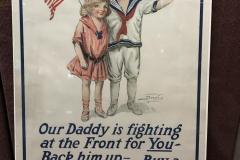 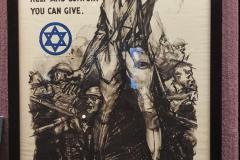