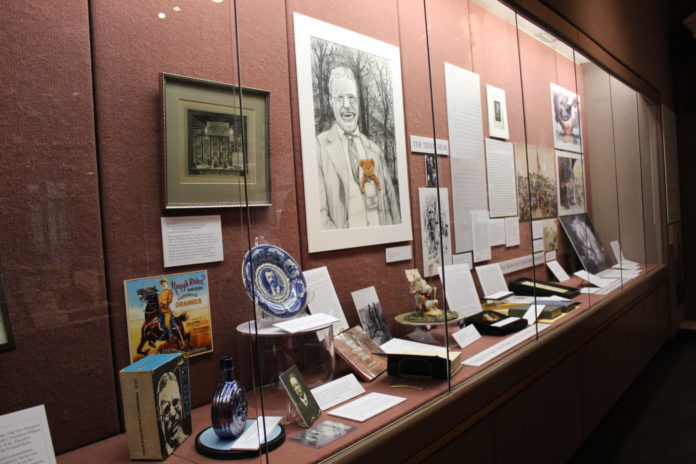 Something caught the eye of Rabbi Lance Sussman nearly two decades ago when he first came to Reform Congregation Keneseth Israel: a large stained glass window in the lobby in memory of President Theodore Roosevelt.

“What is a big memorial to Teddy Roosevelt doing in a synagogue?” Sussman wondered.

No, the 26th president wasn’t Jewish. But the story behind the window is at the heart of Temple Judea Museum’s latest exhibition, on display from 9 a.m. to 5 p.m. from Sept. 20 to Dec. 20, except for Saturdays and holidays.

A few years ago, Sussman called Rita Rosen Poley into his office. She is the director and curator of museum. With 2019 being the centennial of Roosevelt’s death and the unveiling of the memorial window, Sussman suggested they do an exhibit for the occasion.

“I never refuse a challenge from our rabbi,” Poley said, “and the story did intrigue me.”

The century-old window was commissioned by Rabbi Joseph Krauskopf, who was part of the first class at Hebrew Union College-Jewish Institute of Religion and came to Keneseth Israel in 1887. During the Spanish-American War, he served as leader of the National Relief Commission and visited Army camps in Cuba. It was there he met then-Col. Roosevelt and conducted services for the Jewish soldiers in the Rough Riders. The two stayed in touch and remained lifelong friends.

“Both Roosevelt and Krauskopf were truly men of their era,” Sussman said. “They were incredibly energetic, had their hands in a million things and were successful. It’s not inconsequential that they were attracted to each other.”

Continue reading this article at its original source, The Jewish Exponent Publication