Gay, Jewish, or Both*

* In 2014 a version of this exhibition was presented as an installation at Philadelphia’s Napoleon Gallery.

A collaborative installation between designer Bernardo Margulis and Napoleon Gallery founding member artist, Leslie Friedman
Stereotypes of any group often overlap and contradict themselves. Using pattern, appropriation, and parody, artists Leslie Friedman and Bernardo Margulis explore the complex social mannerisms through which modern Jewish and homosexual identities have materialized as traces of each other.

Gay, Jewish, or Both*

* In 2014 a version of this exhibition was presented as an installation at Philadelphia’s NAPOLEON gallery.

A collaborative installation between designer Bernardo Margulis and artist Leslie Friedman
Stereotypes of any group often overlap and contradict themselves. Using pattern, appropriation, and parody, artists Leslie Friedman and Bernardo Margulis explore the complex social mannerisms through which modern Jewish and homosexual identities have materialized as traces of each other.

Bernardo Margulis is a graphic designer and art director, and the principal of This Makes Me Happy, a small design studio in Philadelphia focusing on branding, typography and patterns. The studio provides personalized attention and customized solutions with a focus on visual communication, concept, and problem solving.

Bernardo holds an MFA in Graphic and Interactive Design from Temple University’s Tyler School of Art and a certificate of Typeface Design from Cooper Union. In addition to running a professional design practice and personal design projects, he is an educator, and interviews people about the things that make them happy for This Makes Me Happy, the podcast.

Leslie Friedman specializes in printmaking, sculpture, and installation. She has a BA in political theory from Brown University and an MFA in printmaking from the Tyler School of Art at Temple University and will begin teaching at the assistant professor level at Louisiana State University in Baton Rouge August 2016. She co-founded the art collective NAPOLEON in 2011 which is comprised of ten artist and curatorial members with a gallery space in Philadelphia’s Chinatown. In 2014, Friedman completed a fellowship at the Center for Emerging Visual Artists and won the Fleisher Wind Challenge. Her work has been exhibited nationally and internationally with some highlights including solo shows at Space 1026 in Philadelphia, Gallery (401) in Providence, RI, and the Delaware Contemporary in Wilmington, DE. Her work deals with political and social themes such as identity, stereotype, gender, religion, and simulacra.

NOTE: The following photographs are from the original installation of Gay, Jewish or Both that appeared at NAPOLEON gallery in 2014

CURATOR’S STATEMENT: In 2014, JT Waldman, the well known graphic artist and friend of the Temple Judea Museum (TJM), asked me a question: “Rita, what would you think of bringing to your museum an exhibition titled, Gay, Jewish or Both?

As frequent visitors know, our exhibitions are eclectic: Historic and contemporary Jewish Art and Judaica;  the culture of Jewish food;  Israel;  Jewish history; the art of Jewish books, etc.  All just a very few highlights of a sixteen year visual exploration of what it means to be Jewish. But the Temple Judea Museum has never ventured a look at any specific gender group. Until now.

Why start with an exhibition about Gay and/or Jewish identity politics? Bernardo Margulis and Leslie Friedman, the creators of Gay, Jewish or Both, follow in the TJM tradition of artists in search of meaning, such as handmade book artists, Robbin Ami Silberberg, Doug Beube and Sandra Jackman, who each used the TJM walls and showcases to search for personal and communal meaning in the tragedies and joys of the Jewish past; or Jordan Cassway who captured moving stories of immigration with his camera; or the photographic journey of Daniel Shanken who tried to make sense of conflicts in Israel between Jew and Jew, the TJM path forward is clearly found in our past.

In addition, also in 2014, and timed to coincide with October’s LGBT History Month, Jordan Dashow wrote an article for Reform Judaism.org titled, “Our Decades-Long Fight for LGBT Equality”.  In it he reflects upon the Reform Jewish Movement’s history of fighting for LGBT rights and lays out the Movement’s long and rich record in this area. In fact, Reform Jews were advocating long before it became a mainstream equality movement, dating back to a 1965 national resolution by the Women of Reform Judaism.

This exhibition draws upon an earlier 2014 NAPOLEON gallery installation which converted that gallery into a welcoming domestic scene of a dining room – a young man has just set an exquisite brunch table for friends to celebrate the New Year with bagels, mimosas, and monogrammed napkins. But who is he?  Through this composed scene Gay, Jewish or Both seeks to create a dialogue about the ever-evolving discussion of what it means to be Jewish and/or Gay. Friedman and Margulis believe modern homosexuality and Jewishness mirror each other – a notion they derive from each group’s respective history of marginalization. As the curator of this exhibition I hope you enjoy the beauty of the work these two have created and that you will also join the conversation of what it means to be Gay, Jewish or both that will endure long after this show is but a memory.

The Hebrew word for “stranger” in the Bible is Ger.  Remarkably, the experience of the Ger provided the existential basis and rationale for the “ethical” in Judaism.  “You shall not oppress the Ger,  the stranger, because you were Gerim (pronounced “gay-reem”) in the land of Egypt.”   Subsequently, in rabbinic Hebrew,  Ger also came to mean “convert.”  Today, a Ger  is not a “stranger” but a “convert” in Judaism.   The “other” is “us” and “we” are the “other.”

In modern Jewish life, we are just learning to make the LGBT-Ger-stranger into the LGBT-Ger-convert-one-of-us.”  It is not an easy process.  Growing up in a typical Jewish suburb of the 1950s and 1960s, I was regularly exposed to talk and jokes about fagelles, the Yiddish diminutive for “fag.”  The “-le” suffix was meant to make the term softer than “fag” or “homo” but it really didn’t.  It still marginalized. It still hurt.  I even remember being told not to wear “white socks” or “white sneakers” because they might be misinterpreted to mean I was “one of them….you know, a guy with a limp wrist.”  Even in rabbinic school in the late 1970s, I remember faculty uneasily noting the “revolutionary nature of the gay movement and its possible implications for the American Jewish community.” I don’t know when the tipping point occurred but exhibitions like Gay, Jewish or Both suggest we as a community are making progress.  Both communities know what it means to be the “other,” both communities  have struggled to go beyond

“other-ness” and, at times, as this exhibition illustrates,  sometimes we are indivisibly “both.” 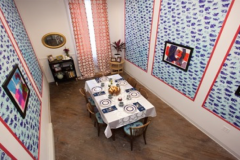 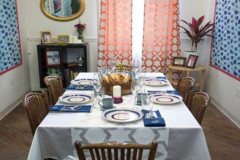 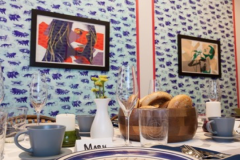