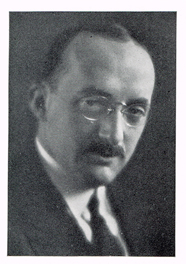 1920-1925 Assistant,  and then became Associate and Interim Senior Rabbi at Keneseth Israel

Abraham Jehiel Feldman, Reform rabbi, author, and civic leader, was born on June 28, 1893 in Kiev, Ukraine. In 1906 he came to the United States with his parents and they settled on the Lower East Side of Manhattan in New York City.

He attended Columbia University and received a BHL (1913), the University of Cincinnati where he received an A.B. (1917), and the Hebrew Union College in Cincinnati, where he was ordained as a Rabbi (1918).

After graduation, Rabbi Feldman served as Associate Rabbi to Stephen S. Wise at the Free Synagogue in New York City (1918-1919); as Rabbi at Congregation Children of Israel in Athens, Georgia (1919-1920); as an associate, then acting, Rabbi at Congregation Keneseth Israel in Philadelphia (1920-1925). This was because of the unexpected passing of Rabbi Krauskopf in 1923.  While at KI he suggested the creation of the Men’s Club in 1922.

A nationally known Jewish leader, Feldman served as President of the Central Conference of American Rabbis (1947-1949). He served as an officer of the Synagogue Council of America (1955-1957), the Jewish Ministers of Philadelphia, the Federation of Jewish School Teachers of Pennsylvania, the Jewish Teacher’s Association of New England Liberal Schools, the Alumni Association of the Hebrew Union College (1945-1947), and the World Union for Progressive Judaism (1947-1949). He was on the Board of Directors of the National Farm School (Doylestown, Pennsylvania), United Jewish Charities, and Mt. Sinai Hospital (Hartford). He was an active member of the Board of Managers of the Department of Synagogue and School Extension of the Union of American Hebrew Congregations, and a member of the governing board of the American Jewish Committee, and the Military Chaplains Association.

His leadership in community affairs is demonstrated through his involvement in the Connecticut Birth Control League, Hartford Music Foundation, the Connecticut Advisory Committee of the United States Commission on Civil Rights, the University of Hartford, Hartford Rotary Club, various offices within the Masonic movement in the United States and Israel, and the American Jewish Historical Society.

Rabbi Feldman was the author of numerous publications during his lifetime. His writing career was extensive.  Some examples are Associate Editor of the English-Yiddish Encyclopedia Dictionary (1910-1912), 1929 founder and editor of the Connecticut Jewish Ledger, 100 Benedictions (1948), Confirmation (1949), Reform Judaism: A Guide for Reform Jews (1953), and American Reform Rabbi (1965). He was also a contributor to a number of encyclopedias.  Rabbi Feldman received honorary degrees from Hebrew Union College (D.D., 1944), Trinity College (STD, 1953), Hillyer College (LL.D., 1953), Hart College of Music (D.Hum., 1953), the University of Hartford, and Parsons College.