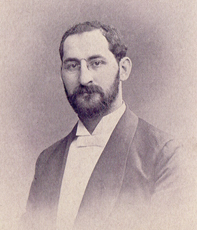 Leonard Levy was born in London, England and attended the University of London and the Jews’ Theological College.  His first rabbinic assignment was in Bristol, England. When he came to the United States and he served as a Rabbi in Sacramento, California.

Then he came to KI in 1893. He gave many Sunday Discourse sermons to the congregation.  They were of his own thoughts as well as sharing points from Rabbi Krauskopf when he was away from the congregation.  In 1898, he took a short leave of absence from KI to serve as a chaplain with Col. Kagan’s brigade in the Spanish American War.

Leonard Levy, a dynamic leader with an internationalist outlook. In 1901 he was offered a full time pulpit in Pittsburgh, PA at Rodef Shalom. Rabbi Levy should be noted for his work to strengthen interfaith communication in Pittsburgh and beyond. During his time at Rodef Shalom, he started an international peace organization and co-edited the weekly Jewish Criterion. He continued to preach at both Sabbath and Sunday services.

At Rabbi Levy’s invitation, President William Howard Taft visited Rodef Shalom on Saturday, May 29, 1909. This was the first time that a sitting United States president spoke from the bimah of a Jewish congregation during regular Sabbath services.

Rabbi Levy was a man of firm convictions and strong personality. He was an influential leader of the Reform Movement in America. His teachings and engagement with the world still resonate with today’s issues of social justice, interfaith cooperation, and civic character.