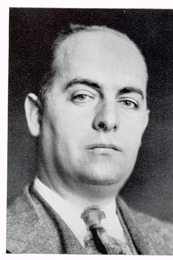 Rabbi James Heller, born in New Orleans was a graduate of Tulane University. Following his ordination at the Hebrew Union College‐Jewish Institute of Religion in Cincinnati, he came to KI.

Rabbi James Heller had the distinction of being installed as Assistant Rabbi at Keneseth Israel by his father, Rabbi Max Heller of New Orleans. In 1917 Rabbi Heller requested permission to serve as a chaplain in the Army of World War I. He was a chaplain with the American expeditionary force. The congregation continued his full salary while he was in the service. In 1920 Rabbi Heller resigned from his service at Keneseth Israel.

He then went on to Little Rock, Ark. From 1920 as Assistant Rabbi, 1926 Senior Rabbi until 1952 he was rabbi of the Isaac M. Wise Temple. While he was the Senior Rabbi of the Isaac M. Wise Temple, he also participated many other aspects of American Judaism. In 1930, he also became an active part of the Labor Zionist Organization of America. In 1941-1943, Dr. Heller was a President of the Central Conference of American Rabbis. He also served as a member of the Hebrew Union College‐Jewish Institute of Religion Board of Governors and of the Executive Committee of the Union of American Hebrew Congregations.  In 1945, he was National Chairman of the United Jewish Appeal.

Dr. Heller served on the Cincinnati Board of Education and on the Board of the Cincinnati Planned Parenthood Association. He was the author of a biography of the founder of American Reform Judaism entitled “Isaac M. Wise—His Life, Work and Thoughts” and also of a history of the Wise Temple.

Rabbi Heller passed away in 1971 at the age of 79. He was kindly memorialized in the New York Times.