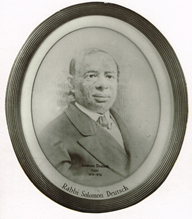 Solomon Deutsch, a Senior Rabbi at Keneseth Israel, was born in the German state of Silesia in 1816. Rabbi Deutsch was educated at the Universities of Breslan and Goettingen. He served as a Rabbi of Posen, Germany.  In 1857, the Congregation of Keneseth Israel elected Dr. Deutsch as Rabbi; and helped to pay his expenses to come to the United States. During his time at KI, Rabbi Deutsch suggested various reforms. In 1858, he implemented two of those reforms; one that men and women could sit together and the other that Rosh Hashanah would now be observed for two days.

In 1869, the disagreements about ritual matters between Dr. Deutsch and the Reader, Rev. L. Naumburg** led to both men being dismissed from their posts.

After serving the congregation at Keneseth Israel, Dr. Deutsch moved to Syracuse, New York. He was a noted abolitionist and expressed his opinions at Keneseth Shalom Temple until 1864.  Then he moved to Congregation Har Sinai in Baltimore.

In 1869, at the third Annual Council conference of the Union of American Hebrew Congregations, The Sabbath School Committee awarded a prize to Rabbi Samuel Deutsch for his book on Biblical History. At this conference, Rabbi Deutsch, one of twelve Rabbis, along with Rabbi Einhorn and Rabbi helped to create the famous Philadelphia Platform for the radical reform of Judaism in America. These documents became the framework for the 1885 Pittsburgh Platform.

In 1876, Dr. Deutsch served as the Rabbi of Congregation Beth Israel in Hartford Connecticut. In his sermons, he questioned praying in Hebrew if a person did not understand the language. He helped Beth Israel change from the use of an Orthodox prayer book to the 1877 “Minhag America” by Rabbi Isaac Mayer Wise.  Several years later, they changed to the 1858 “Olat Tamid”, A Perpetual Blessing prayer book by Rabbi David Einhorn. The prayer book was in German and the services were short. Rabbi Deutsch also led his congregation into other reforms in American Judaism, such as praying without covering one’s head, and changes in the funeral and the mourning rituals. Dr. Deutsch’s efforts to bring about reforms in American Judaism caused a split in Beth Israel’s congregation.  Rabbi Deutsch was among a few rabbis in America who were greatly affecting change with this sector of the Jewish community.

**(According to the anniversary book –  KI at 100 – ‘in 1850 Naumburg was elected “Reader”; the title of Rabbi was not accorded to him although he performed the functions of Rabbi’)