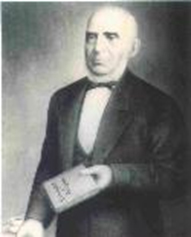 Rabbi Samuel Hirsch was born at Thalfang, Prussia. He was university trained in Bonn.  Dr. Hirsch served as rabbi in Dessau (1839–41), and as Chief Rabbi of Luxembourg (1843–66). Many of KI’s leaders were familiar with his writings on Reform Judaism.  So while he was in Luxembourg, KI approached him and offered him a contract for life at $4,000 per year and $2,000 per year in case of retirement.  He accepted their offer and moved to America.

The Foster Home and the Association for Jewish Children were an outgrowth of this organization.  Rabbi Hirsch served as President of the American Rabbinic Conference in 1869. This was the first conference of Reform Rabbis, which met in Philadelphia from Nov. 3 – 5, under his chairmanship.

Also, he was founder of the Philadelphia branch of the Alliance Israelite Universalle.  This group was the first international Jewish organization for philanthropy.  Under Rabbi Hirsch, Keneseth Israel was very active in social justice causes.  Congregants of KI participated in and were leaders of the .  KI President Klein cited all of these charitable groups in his congregational address in May of 1887.

Rabbi Dr. Samuel Hirsch’s 7-year Torah reading cycle, discontinuance of Friday evening Services, founding of The Jewish Publication Society, eliminating the Bar Mitzvah and continuing the Confirmation service, establishing a library and abolishing the blowing of the shofar to name a few.

He spent the last year of his life in Chicago with his son Emil G. Hirsch, who was also an important Reform rabbi in the United States at that time