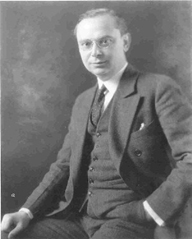 Fineshriber was born in St. Louis, Missouri and later lived in Evansville, Indiana, where his father was a Rabbi. He was a graduate of Hebrew Union College, Dr. Fineshriber became KI’s first American born Rabbi.

In 1900, upon graduation from the Hebrew Union College and the University of Cincinnati he served congregations in Davenport, Iowa and Paducah, and Kentucky.  He was in Memphis, Tennessee in 1911 as Assistant Rabbi at the Congregation Children of Israel.  Upon the unexpected passing of Rabbi Samfield, he became their Chief Rabbi in 1915.  Rabbi Fineshriber was serving in Memphis when the committee from Keneseth Israel came to hear him and talk with him.  At the April 8, 1924 meeting, Rabbi Fineshriber was ratified as Rabbi of the Congregation of Keneseth Israel.

In the Fall of 1924, he urged a few changes: to add the reading of the Torah on Saturdays and High Holy Days, covering of the Torah with attractive robes and adding a violin or cello to the Choir and a short musical service on Sundays and the adoption of the Union Prayer Book for services other than Sundays. The Krauskopf Hymnal and the Sunday Services continued.

1n the summer of 1925 after the resignation of Rabbi Feldman, Rabbi S. Ferdinand Becker was living in Philadelphia and helped with funerals and Friday evening services.

In June of 1927, Temple University awarded Rabbi Fineshriber an honorary Doctor of Divinity for distinguished service to the University and to Philadelphia.

Among the many innovative influences he had on the congregation were the restoration of the position of cantor, the 1924 adoption of the use of the Union Prayer Book, the expansion of the religious school, in 1929, the establishment of an emergency fund to help the needy during the Great Depression, and in 1931, the re-establishment of the Bar Mitzvah ceremony. In 1924, the reading of the Torah at Sabbath services

1934, during the annual meeting, the congregation elected to honor Dr. Albert Einstein with an honorary membership. This event took place at the Bellevue Stratford Hotel.  Dr. Fineshriber was also honored for 10 years of service to the congregation.

1941, due to repairs and construction in the Main Sanctuary and the use of the Alumni Building, the Sunday Service was discontinued.  Instead a Friday evening 8:30 service was held.  After the service a social hour in the Krauskopf Hall was added as well.  Members could meet one another.

In 1942 Dr Fineshriber led the efforts to sell War Bonds.  KI donated over a million dollars to this effort. Sisterhood, Mens Club, TKIYA, the Alumni and the Sunday School all contributed many other efforts towards World War II. A congregant, Mr. Sidney Newmann offered to pay for the construction of a memorial chapel to honor his parents. A Victrola was also installed into this chapel.

1942 in Atlantic City the American Council for Judaism was started.  One of its basic principles is that we Jews constitute a religious community, not a nationality and accordingly it was opposed to the establishment of a Jewish State.  Dr. Fineshriber was one of the leaders of this Council along with Rabbi Louis Wolsey of Rodeph Shalom.  Debate within this organization occurred and many actions were put off until the next meeting of the Union of American Hebrew Congregations. The decision was that any political efforts were beyond the scope of this organization.

On April 5, 1946 Mrs. Eleanor Roosevelt spoke at the service acknowledging the honor paid to her late husband. Dr. Fineshriber gave a dedicatory address for the bronze plaque erected in the lobby of the Temple dedicated to President Roosevelt.

At the annual meeting in 1946 Mr. Earl G. Harrison was given an honorary membership.  He was the first non-Jew to receive this honor.  He had been the Commissioner of Immigration and Naturalization during the trying period of the war.

On a national level, Dr. Fineshriber’s services were in great demand as an arbitrator in labor strikes in the textile mills, and in the movie industry.  He met with industry leaders and convinced them to adopt a code of morals, which would meet with the approval of the religious leaders of the country. Dr. Fineshriber was named the Chairman of the Pennsylvania State Adjustment Board under the National Recovery Administration of President Roosevelt. Dr. Fineshriber, Rabbi Feibelman, and Congregation Keneseth Israel helped to form Temple Judea in the Oak Lane section of the city until they could take their place among the Reform temples in Philadelphia.