Walter Plotnick is a photo-based artist who received his BFA from Tyler School of Art and MFA from University of the Arts.  His current work is a hybrid of wet photography and digital process and he draws his  influences from the work of Bauhaus, Constructivist and Surrealist photographers from the 1920s through the 1930s. He has exhibited both in the USA and in Europe and is represented in a number of collections. Major series by this artist have included the 1939 World’s Fair, Abstract Photograms and 1930s Circus Performers.

My current work is a hybrid of wet photography and digital process. I am influenced by the work of Bauhaus, Constructivist and Surrealist photographers from the 1920s through the 1930s.

Our identities are not always self-directed. We are seen as children, siblings, spouses and parents. We are also identified by our age, gender, nationality, ethnicity, religion, and political affiliation. In some cases, our identity is validated by official documents issued by governmental agencies, corporate entities, and religious authorities. Officially, we are only what the validating documents say we are.

In visually exploring the passports and other official documentation of Jews emigrating from Europe in the first half of the Twentieth Century, I have found that contemporary themes of immigration and emigration emerge. The tragedy of being vilified in one’s homeland and the subsequent horrors faced by refugees reverberates across time. For those depicted in stark portraits affixed to state-issued documents, the stamp of official validation often meant the difference between life and death. 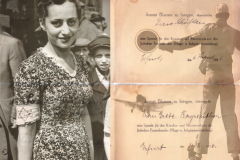 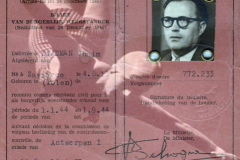